This article introduces you to switches by covering what they are, commonly-used types, and their different uses.

Switches are electromechanical devices that allow users to interact with electronic circuits. Switches are used in many different applications including option buttons, circuit resets, and generic inputs.

More often than not, Identifying a switch is very easy to do because they are often unique components but, as per usual, there are some that are not as obvious! If a switch is identified on the PCB, it will have the identification of SW, S, or its actual function such as â€œONâ€, â€œOFFâ€, â€œENTERâ€, or â€œSETâ€.

PCB membrane switches are one of the most common switches in high-volume products as they are incredibly cheap and easy to implement.

The switch itself is nothing more than a pair of PCB contacts that sit below a piece of rubber. The rubber is coated with a carbon coating and when the rubber is pushed onto the contacts it closes the connection.

Common uses for PCB contact switches includes remote controls, most desktop keyboards, calculators, and other mass produced items. PCB contact switches may sometimes not have an identification as they are copper features, but they are incredibly easy to spot. Contacts can be made from a carbon coating, gold, or tinned but are never just bare copper.

Metal cap PCB contact switches are different from the previous switches because, rather than using a rubber membrane with carbon contact pads, they use a metal dome that, when pressed or released, provides a click action.

These PCB contact switches are better for situations where user feedback is beneficial (such as knowing when the button has been pressed). Sometimes, these switches have a thin plastic coating above the metal cap to prevent them from falling off.

Metal contacts held over PCB contacts via a plastic sheet.

Tactile switches are the most common mechanical switch that do not use a PCB contact. They come in all shapes and sizes, are available in through-hole and SMD packages, and, on the whole, are very cheap.

One feature that makes a tactile switch desirable is the provided feedback in the form of a click so users know when it has been pressed properly.

Single pole dual throw switches, more commonly known as SPDT switches, are simple switches with one input and two outputs making it so the switches can electrically connect and isolate two single wires from a common wire.

These days, SPDT switches are becoming less common, but in the past, they were very popular in designs that needed a switch to isolate power from a circuit (such as a battery).

They come in both through-hole and SMD varieties and their packages are also incredibly varied. The best way to identify these switches is that they will often lock into either position, and they commonly have only three pins (however, they may sometimes have four).

Miniature snap-action switches are commonly called micro switches after the company who invented them, also called Micro Switch (now a part of Honeywell). 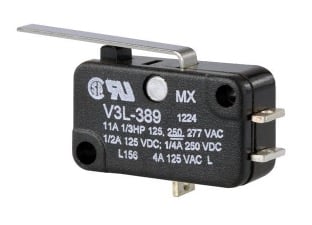 They are similar in function to SPDT and tactile switches in the way that they can electrically isolate a wire and have a tactile-like clicking function. However, snap-action switches have levers (often with a roller attached), that allow them to switch with very small amounts of force.

Snap-action switches are often found in delicate and intricate situations where small movements need to be detected. For example, they are commonly found on computer numerical control (CNC) machines as limit switches in order to prevent the CNC from going beyond its axis, in safety applications such as microwave doors, and in other movement-sensitive machinery. 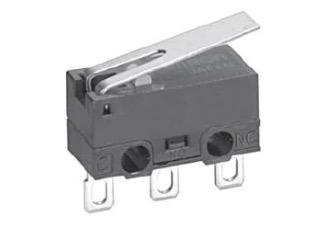 A snap-action switch from Omron. Image courtesy of Mouser.

Dual inline package (DIP) switches, as the name suggests, are made up of multiple STSP switches that sit in a DIP. Each switch is electrically isolated from the rest and they are not designed to be constantly adjusted.

These switches are available in through-hole and SMD varieties and they are also available with protruding switches (easier to adjust), and switch heads that are inside a groove to prevent accidental changes.

DIP switches are often found on microcontroller boards where they are used to change the function of the board or provide some form of basic configuration.

While they are still produced, they are not often found in modern designs, because two-wire EEPROM memory ICs are cheaper and can hold many kilobytes of configuration data.

Reed switches, though a bit old-school, are very useful and are controlled by a magnetic field. A reed switch consists of a very small enclosure that has two strips of ferromagnetic contacts that close upon the presence of a magnetic field (such as from a small bar magnet).

These types of switches are incredibly useful in situations where there can not be physical contact between two objects such as doors and barriers. The door or barrier is fitted with a magnet that, when opened or closed, causes the reed switch to open or close.

Reed switches often consist of a glass vial filled with an inert gas that prevents the contacts from oxidizing. The glass tube itself may be further surrounded by a plastic enclosure. 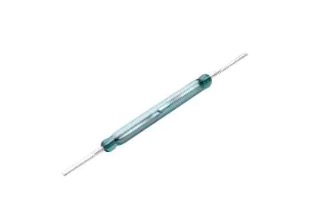 Push button switches are switches that have an internal spring mechanism to prevent the switch from being latched in its pressed state, making them bounce back when released.

These switches can either be made to make or break an electrical contact and are useful in a number of applications including option buttons on an interface, as emergency stop buttons, or on game controllers.

One of the problems with some push buttons is that they donâ€™t provide tactile feedback (i.e., that satisfying click) so it can be difficult to know if they have been pressed properly.