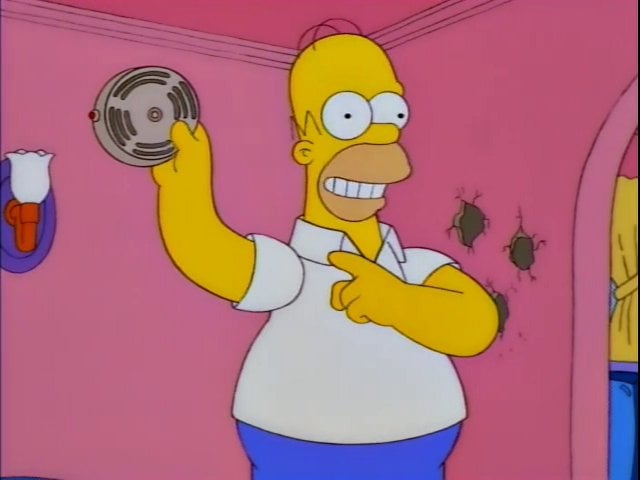 A working prototype of The Everythings OK Alarm by Homer Simpson. This prototype detects gas leaks and fire.

This project is a prototype of Homer Simpson's brilliant invention, "The Everything's OK" Alarm. The alarm will sound off every three seconds, letting you know that everything is OK!  If gas or fire is detected, things are NOT OK and the alarm will stop.

I got all my sensors from a kit by SunFounder. This kit came with some hardware specific libraries for my ADC Converter and my LCD Screen. Other companies should provide equivalent libraries, or you can try the SunFounder ones which can be found here. If you download the zip, the two you'll need are 'PCF8591.py' and 'LCD1602.py'.

I use FileZilla and an ssh connection to develop from my desktop. To get started create a directory on your pi called 'FlameDetector' or whatever you'd like to call it, and move 'PCF8591.py' and 'LCD1602.py' into that directory. Now lets get started with the Gas Sensor

To set up the gas and flame sensor I used the PCF8591 ADC converter to generate numerical readings. The Gas sensor and Buzzer were wired as shown below

To test your wiring you can use the code below. If you have a lighter, and press the gas portion down without igniting it you should see a change in the Gas Sensor's reading.

Your values might be way different depending on your sensor but you can clearly see where I released some gas from the lighter. You can also adjust the sensitivity of your sensor using the potentiometer soldered to it. 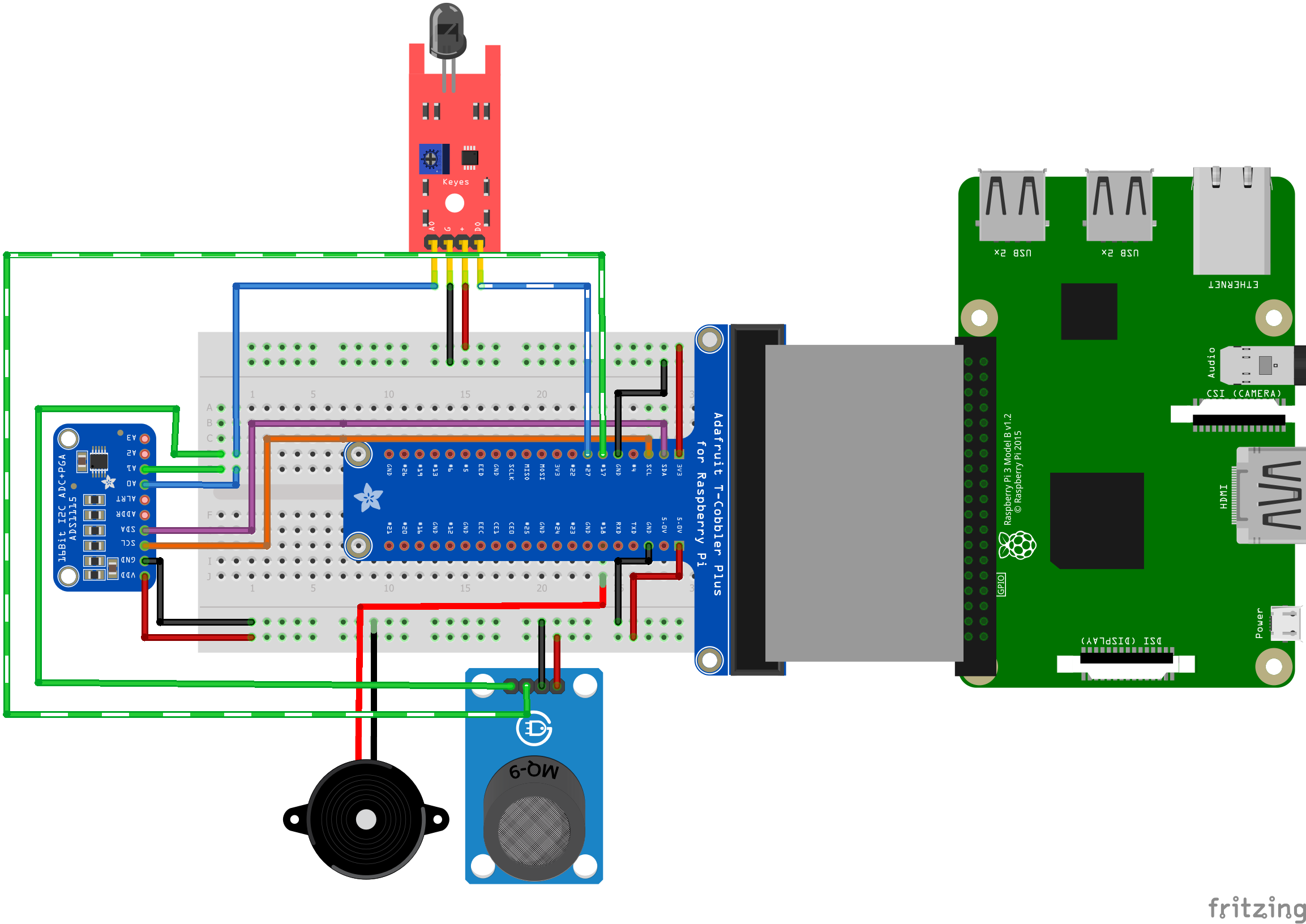 You can test your flame sensor using the code below. The flame sensor I used was an IR based flame sensor meaning it looks for a specific wavelength of light, which it interprets as being from a flame. I was reading and this can be problematic based on your environment as there may be enough IR light noise that it may think there is a flame constantly, but you can again adjust the sensitivity using the on-board potentiometer.

The output of this test should be similar to the output of 'GasTest.py', if you can get your digital value to change in the presence of a flame than you are good to go. If not try a darker environment.

I used an I2C lcd1602 which uses SCL and SDA. The wiring for this model is quite simple as the individual lines are interfaced already. I used the SunFounder kit mentioned in the "Assets" section above, so I referenced a lot of their documentation. By adding the LCD the all the wiring (arguably the most confusing part) is done. 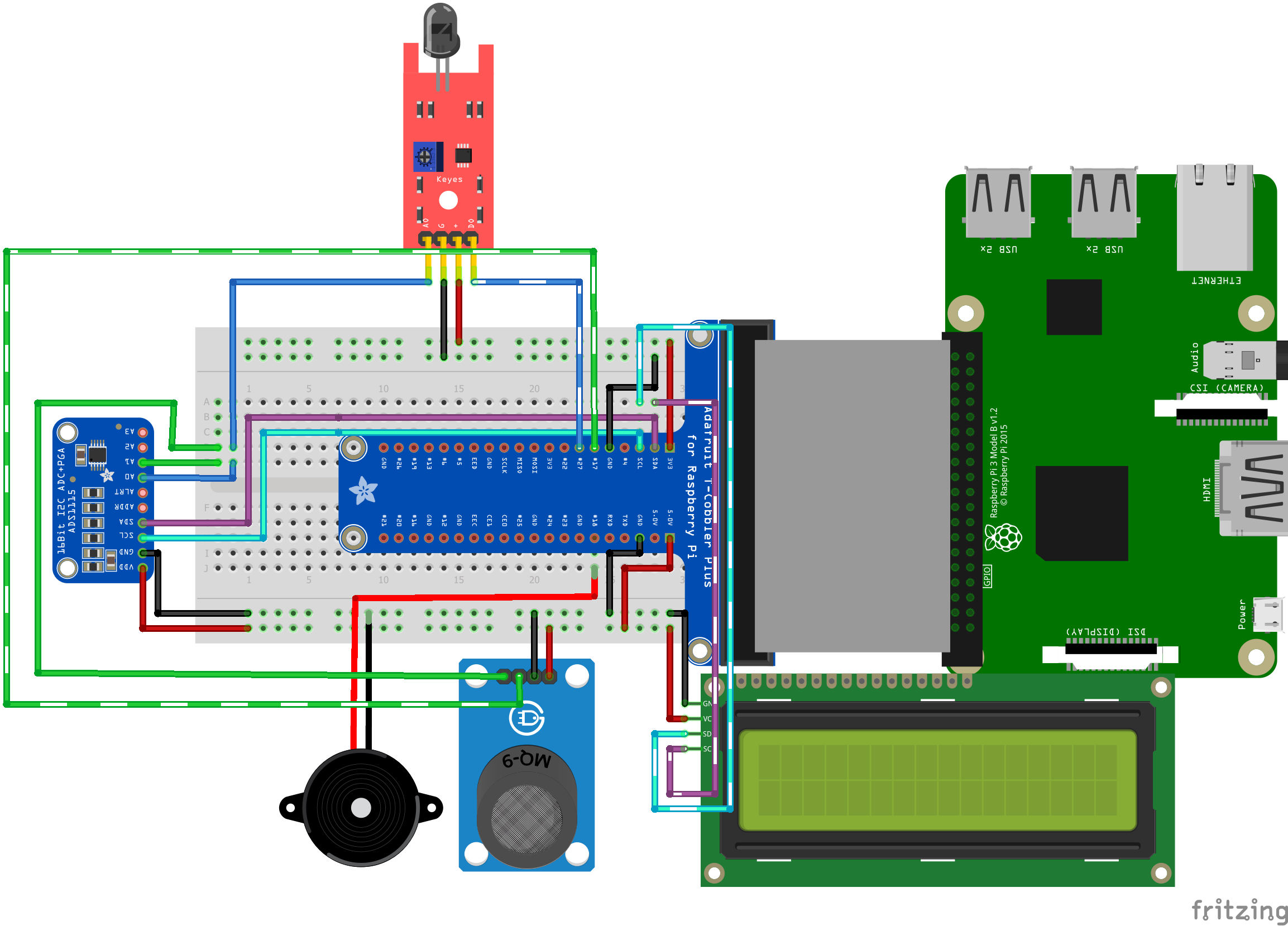 So Homer's "Everything is okay alarm" goes off every three seconds when everything is okay, and when things aren't okay the alarm stops. Here is the clip. So the code is pretty simple. If I could make one suggestion it'd be that if you are troubleshooting and you know your buzzer works, to unplug it to save yourself some frustration.