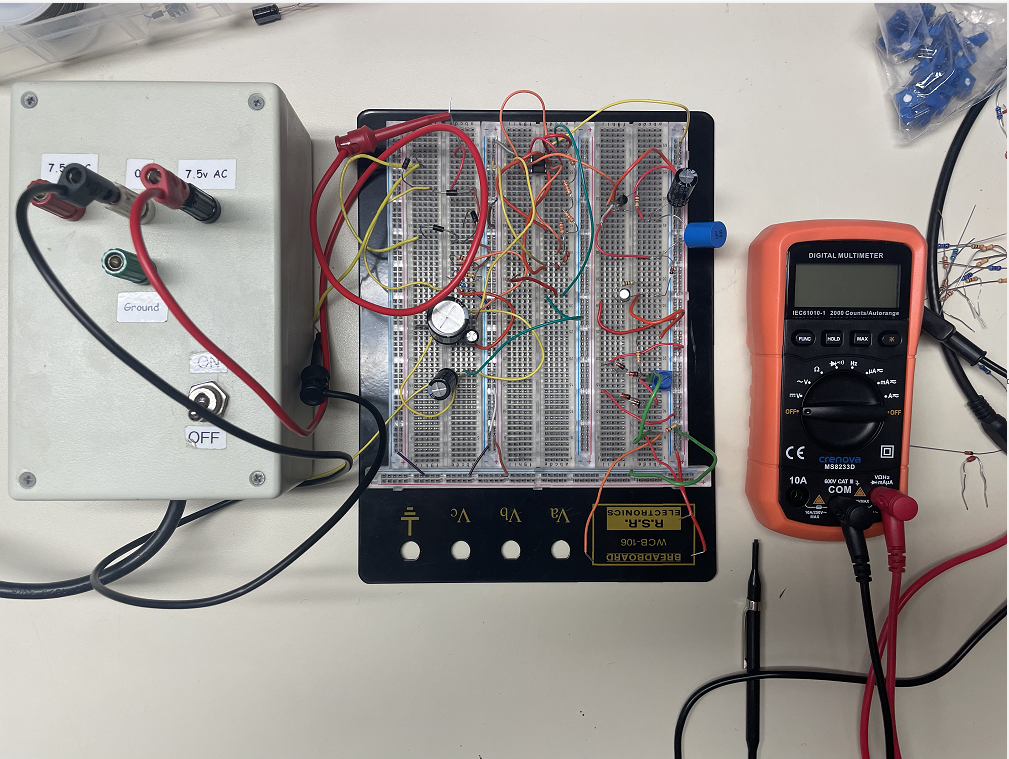 The purpose of this project was to create an AC to DC voltage amplifying circuit. We learned how to apply circuits we had made in previous labs like the rectifying one and the voltage regulator. In addition, we learned how to implement new circuit designs like the boost converter into a larger project. We used common EE lab bench equipment such as oscilloscopes. We were given specifications that laid out our required input voltage and what the voltage regulator should output along with some constraints in the other parts of our design.

Below are some of the exact requirements for the various circuit elements:

1. Input voltage of Â±7.5 VAC, obtained from the laboratory transformer.

3. Output voltage must be adjustable by means of a single potentiometer in the circuit.

4. The circuit must employ a rectifier and a capacitive filter which establish an unregulated DC voltage of approximately 10 V with a ripple of less than 1.0 V.

5. The circuit must employ a boost topology comprising a transistor switched inductor and a catch diode that feeds an output capacitor. Each of these four parts must operate within their rated limits.

6. The transistor switch must be clocked by a function generator with a frequency of between 50 kHz to 100 kHz.

7. The DC output voltage of the converter must have less than 100 mV of ripple.

AC to DC converters are quite common in the industry as they are the backbone for various consumer electronics chargers.

The features of this project included a full bridge wave rectifying circuit, which was used to convert the AC input into a readable DC voltage. From there we had a 555 timer circuit which provided the waveform for the transistor in the boost converter. This made the transistor turn off and on with a duty cycle of 80%. From there we had the boost converter circuit which increased the voltage. Once we had the circuit increased, we added a voltage regulator which included 4 Zener diodes and a potentiometer in series, which regulated our voltage between 10 and 20 volts.

The ratings and component details for each circuit is given below:

Figure A. Complete Block Diagram of AC to DC Converter

Our input for the overall circuit is the 7.5V AC from the VAV Lab Transformer, which would be sent directly to the Rectifying Circuit. Our rectifying circuit was a full wave rectifier, and our output would be a DC-like signal, holding a nearly-constant positive value. The variation in its consistency, or ripple voltage, is Váµ£ and less than 1V. This output voltage goes to both our Boost Topology and Oscillator. The Oscillator receives the DC-like signal as a power supply to generate a square wave with an 80% duty cycle with an amplitude of 2V. This square wave is sent to the Boost Topology for switching a MOSFET on or off. The Boost Topology also receives the DC-like signal from the rectifying circuit and increases the magnitude past 20V, but still containing ripple voltage. Finally, in the regulating circuit, Zener diodes are used to set limits to the final output voltage. This is from 10V to 20V, as controlled by the Zener diodes, with a Váµ£ of less than .1V, as controlled by various capacitors. A single potentiometer in the regulating circuit sets which output voltage to observe, whether the 10V or 20V.

Our circuit design roughly follows the block diagram in terms of a few smaller circuits to perform their individual functions that were later combined into a final circuit. We found that certain values had to be adjusted in order to move the voltages into the desired ranges. Some of the values used in the schematic were changed to be reflected in the real circuit. The values were changed because the available components did not match the simulated. Additional changes were made as the real circuit was less ideal than the simulation and thus required different values to achieve the desired output. The schematics are shown below with the changes from our initial design to final design discussed in the descriptions. The simulations from each schematic are further below. 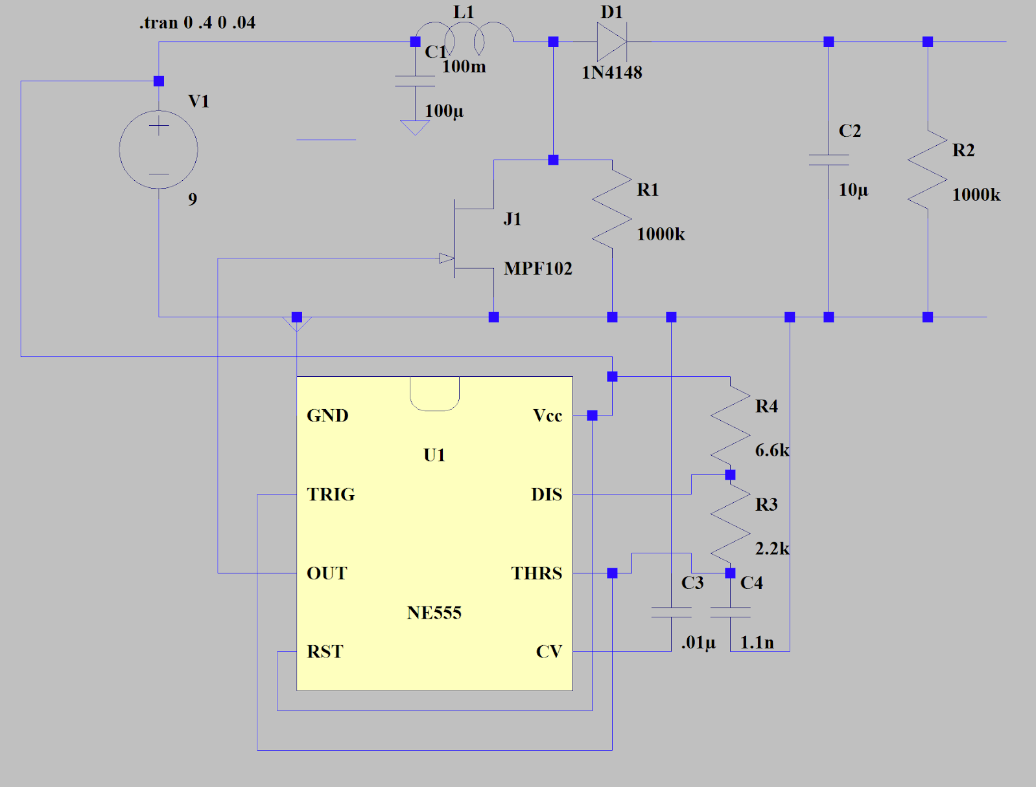