Graphene Ink May Be The Next Solar Cell Module Improvement

Graphene Ink May Be The Next Solar Cell Module Improvement

Perovskite-based solar cells stacked on a silicon sheet with the help of graphene ink could just turn a new page for cell efficiency and lower manufacturing costs.

As the world collectively works towards meeting sustainable energy goals, each new photovoltaic cell improvement seems to carry a certain disadvantage along with the benefit.

In the spiral road to come up with the perfect solar cell within the current constraints, a collaboration between research teams from the EUâ€™s Graphene Flagship initiative, the Italian Institute of Technology, its branch BeDimensional, as well as the Spanish green tech company ENEA, a major player on the Spanish solar power market, turns an important corner.

Advantages are nothing short of making them adaptable to be integrated into RFID sensors as an energy source, support the sustainable skeleton of building-integrated photovoltaics, and enable mass-scale manufacturing at an acceptable cost.

The sting in the tail is that perovskite is toxic, unendurable, and less resilient to environmental conditions, such as heat, cold, and humidity.

The drawback of crystalline silicon solar cells, known for their extensive 25-year lifespan, is that they lack the efficiency and the superconductivity of perovskite.

However, they do get cheaper and have widespread market support, a milestone that is yet out of sight for more innovative materials, including perovskite, graphene, phosphorene, and GaN (Gallium Nitride).

Graphene is the mineral of choice in power electronics and as a stronger mineral, it has alternatively been used to improve the resilience of foldable silicon solar cells. 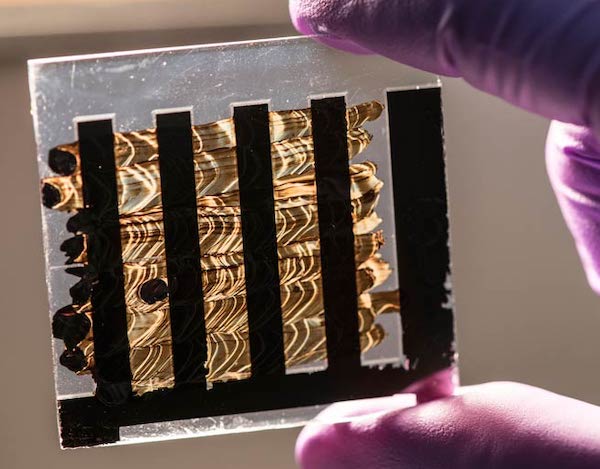 Tandem and Combined Cells as a Solution

Tandem perovskite-cells made by stacking perovskite on top of silicon have broken the record by providing 27.7% efficiency for converting sunlight into energy.

The advantage of combined PV cells, which aim to hit the 30% mark by 2023, is that each of the materials absorbs different wavelengths of light: silicon absorbs red and infrared light, while perovskite targets blue and green light. However, tandem cells are quite pricey, and this is where this newest combination comes as a solution.

The new cells, stuck together with graphene ink, are produced as part of the EU Commission funded project under the GRAPES initiative.

Italian and Spanish researchers experimented by placing perovskite on top of the textured front surface of highly-efficient amorphous/crystalline silicon cells. The complex heterojunction of the two materials was improved by â€œglueingâ€ the two of them together with graphene-based ink.

Solar cell manufacturing has a complex reality behind it, in which multiple manufacturers try to figure out the best way to stack PV modules. Adding graphene into the mix provides a chance to manufacture better-performing, stable, and scalable photovoltaic devices.

The next milestone for this team is to reach the 30% conversion mark, as well as increase the size of PV modules.

The field testing results of the lab research that is next on the agenda could tip the scales in either direction, but it looks that neither of the materials holds sufficient weight to be exclusively beneficial for all advantages of mass solar cell production.

In the game between efficiency and cost of manufacturing, there is no clear winner, especially if we consider that sustainability is an open-ended question for solar cells and that comparing them to fossil fuels in terms of cost and reliability is far from simple.