Part two in this series on how to build a mechanical television covers how to choose the right components.

In part 2 of our Color Mechanical Television project, we will discuss the components used in the circuits. Later, we will get into circuit construction and software. Take a look at the mechanical TV in action in the video below:

The external controls consist of...

Black and white system: A white power LED for disc lighting (a video-driven back light). For example, a 900mA LED like the Avago ASMT MxE2 or Mx22. 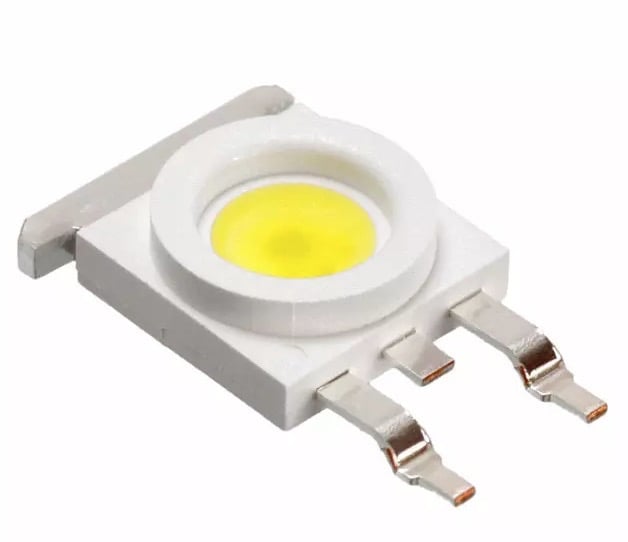 An ASMT MxE2. Courtesy of Digi-Key.

Color System: An RGB triple LED for disc lighting (video-driven back light).Â For example, a 3x300mA RGB LED like the Broadcom/Avago ASMT-MT100-00001. 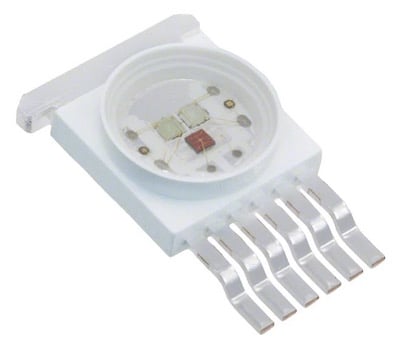 Disc Driving Motor: A DC motor reaching the unloaded speed of 12,5 rps (750 rpm) at a voltage between 6 and 15V. A simple LED used as stroboscope to help with synchronizing the disc (any LED rated for 30mA pulse will work)

This small SMD component is mounted on a separate circuit board and protected from a being disturbed by strong ambient light by a plastic cap taken from an old photo film box. The black and white cardboard counting track features 30 B/W cycles.

The primary power supply shall be a DC voltage source within 12-16V. If the disc driving motor requires more than 9V5 for reaching the target speed, the low limiting power supply value will not be 12V but the required motor voltage + 2V5. In the schematic diagrams, this power supply voltage is marked: â€œV DC IN (+)â€.

The post-diode voltage â€œVPâ€ is provided (in this example) from the synchronization extractor schematic. This power source is used by circuits requiring power but without accurate voltage regulation.

The regulated 9V voltage used by several different circuits is provided by a 7809 regulator mounted on the synchronization extractor. (This regulator location choice is also not mandatory). It is marked â€œP9Vâ€.

If used, the color decoder has its own power supply architecture. Directly connected to â€œV DC INâ€, it has its own internal voltage regulator providing 5V through the source signal â€œVDDâ€. The only dependency that this circuit has from the rest of the appliance is the video synchronization signal (positive composite synchronization Hsync/Vsync from the synchronization extractor). By processing the SECAM carrier channel, it is able to drive the red and blue LEDs directly.

Tune in for the next installment and we'll dive into schematics!