Setting up the Pi NoIR Camera with Raspberry Pi

Setting up the Pi NoIR Camera with Raspberry Pi 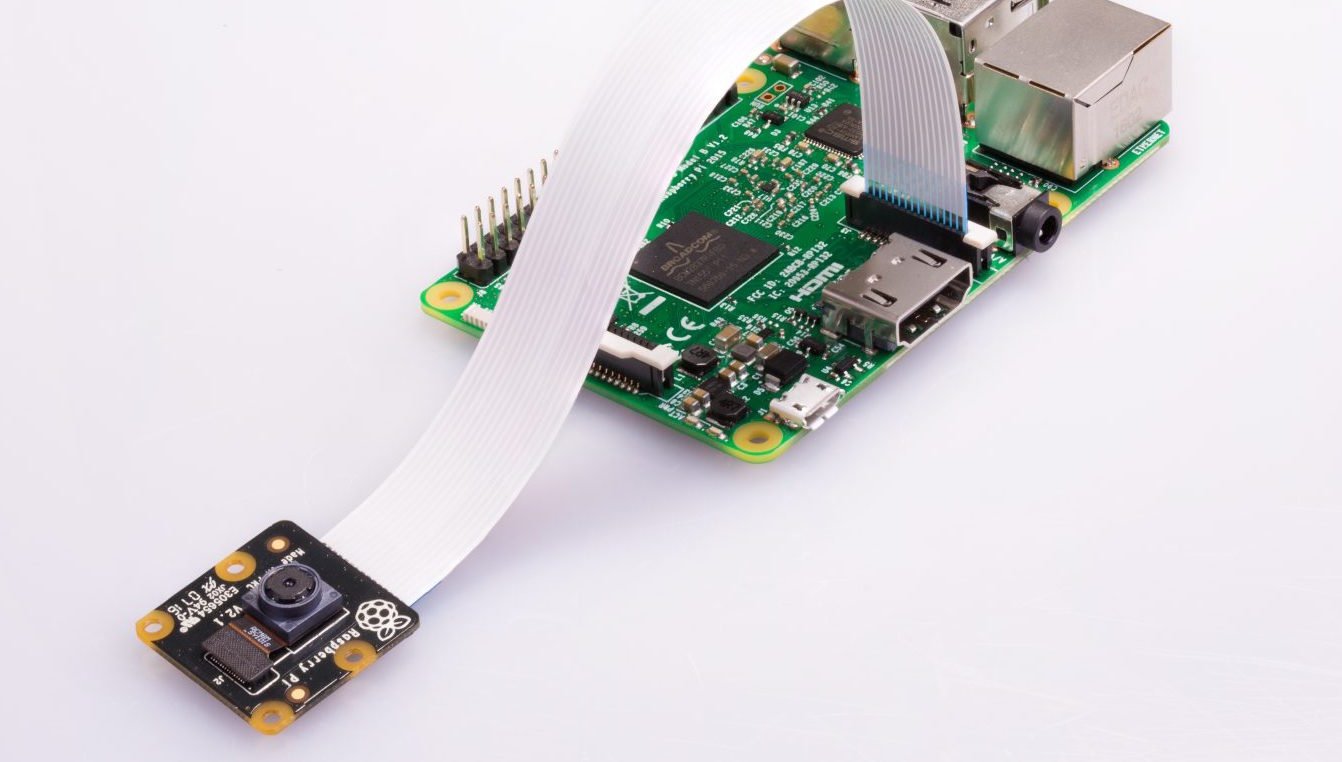 Learn how to connect and interface your Pi NoIR V2 Camera with the Raspberry Pi using Raspbian.

The Raspberry Pi has many accessories and modules, and the camera module is one of the most commonly used. It can be used to take pictures or videos for a variety of different applications and projects.

The Pi NoIR is one of the many camera modules you can use to integrate with the Raspberry Pi R3. This camera is not the same as your typical daylight photography camera. The Pi NoIR has functions that a regular camera module has, but has one big difference: it does not have an infrared filter. This is where the NoIR name came from (No Infrared).

Since this camera has no infrared filter it wonâ€™t have the same quality as an IR camera during the daytime. When it comes to low light environments, however, the NoIR camera sees much better, making it a good camera for applications like night surveillance systems.

This tutorial will show you how to interface the Pi NoIR to the Raspberry Pi. Letâ€™s get started!

Installation of Raspbian and the Pi NoIR

By default, Raspbian has a picamera module installed, which weâ€™ll use to work on our Pi NoIR. To check if picamera is already installed in your version of Raspbian, try importing picamera in the terminal of the Raspberry Pi:

PiCamera is installed, no error returned.

A traceback message will appear if the picamera module is not installed.

When installing the picamera, it is best to use apt to simplify the process of the Unix-like operating system. To install picamera using apt, input the following line in the Piâ€™s terminal:

Connecting the Pi NoIR V2 Camera with the Raspberry Pi

When connecting peripheral and modules, the Raspberry Pi must be switched off. This is a good practice to avoid damage to any devices.

To connect the Pi NoIR camera, locate the Piâ€™s Camera Serial Interface (CSI). This is highlighted with a red circle. 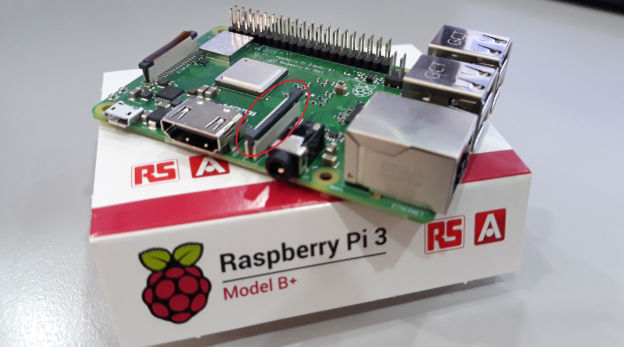 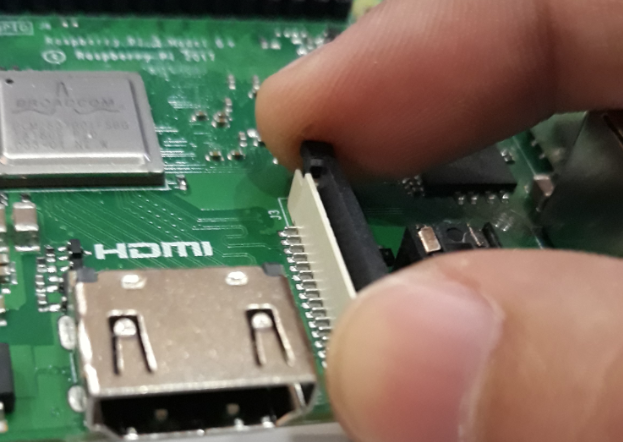 Now, insert the Pi NoIR Camera V2 ribbon into the CSI of the Raspberry Pi. 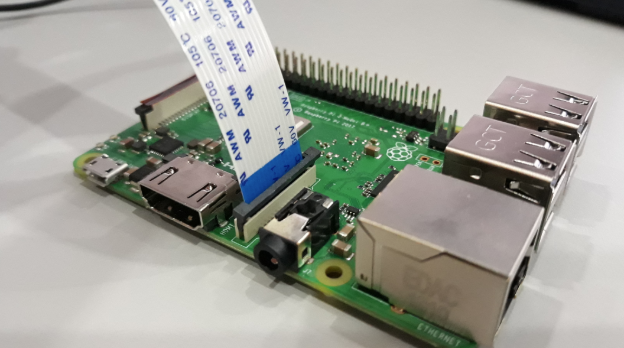 NoIR ribbon inserted to the CSI Port of the Raspberry Pi

After inserting the ribbon, push the plastic clip of the CSI back into place. 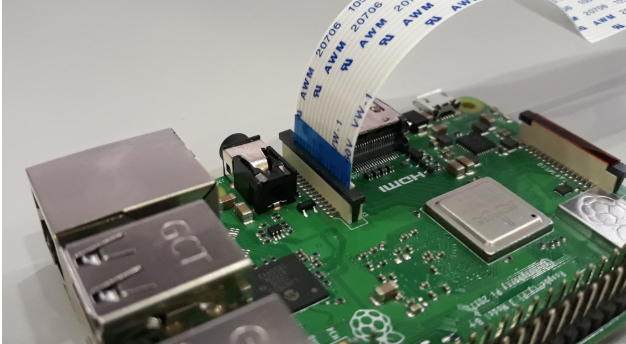 Place the CSI plastic clip back into place

After connecting the Pi NoIR camera, we can boot up the Raspberry Pi. We must enable the camera interface configuration of the Pi before we can test our camera. To do this, begin by opening Raspberry Pi Configuration. 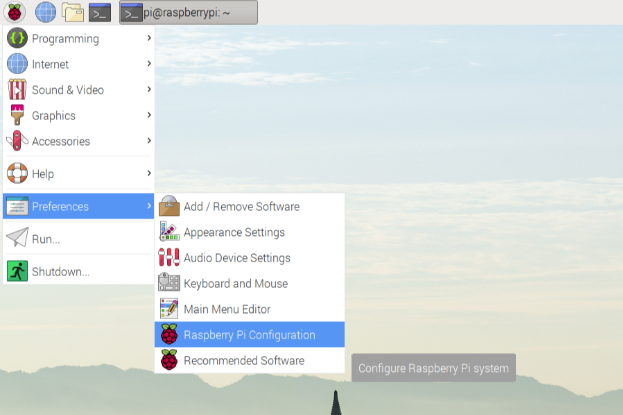 In Raspberry Pi Configuration, enable the camera module as seen in the image below. 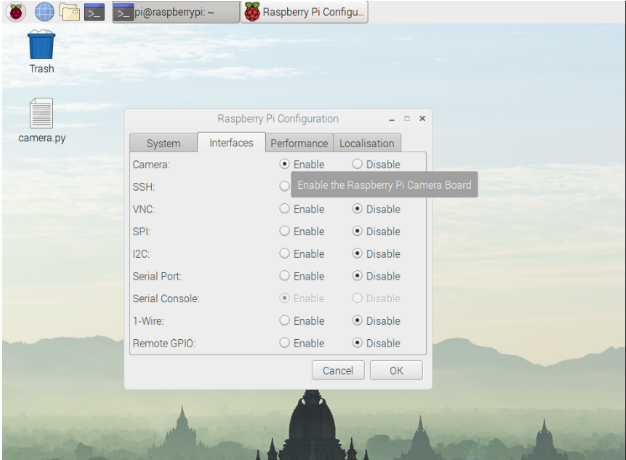 After enabling the camera module, reboot the Raspberry Pi.

Once rebooted, see if the camera is working by typing the following command in the terminal:

The raspistill is a command line tool for capturing still photographs after a five-second delay with the camera module. If everything is working accordingly, this command will let us see a preview of the camera using the terminal.

If the camera preview appears, congratulations on your first interfacing of the camera module to the Raspberry Pi!

After running the camera preview, we can try a basic program to capture an image to a file using Python.

NOTE: When naming the .py script, do not name the file picamera.py. Naming scripts after an existing Python module will cause errors when you try to import those modules. 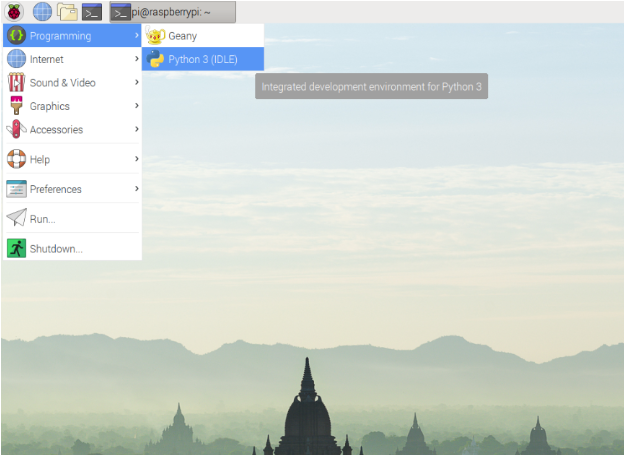 After opening Python IDLE, we need to create a new file, since it is a default Python shell which directly executes any command we input. 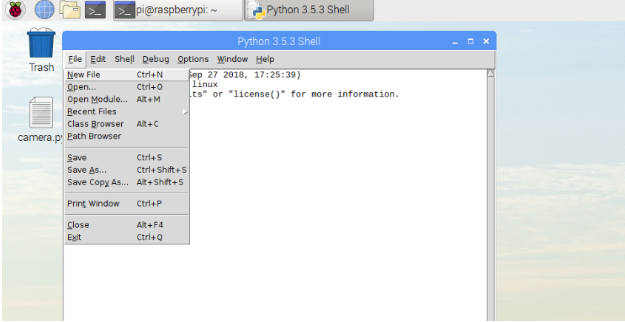 The code below is an example code for the capture() method from picameraâ€™s documentation.

Using the new file we created, input the following Python code and save as â€œ/home/piâ€ with a filename camera.py.

The capture() method will save the captured image to the output file named image.jpg.

To execute the Python code youâ€™ve saved within the file â€œ/home/piâ€, open the Raspbian terminal and input:

This will run the camera and take a picture after a two-second delay. The captured image can be seen within â€œ/home/piâ€ directory.

You now know how to do the basic interfacing and coding on your Pi NoIR! For more details and function checkout picameraâ€™s documentation.

You can also check some projects involving picamera:

I love to explore and make things that incorporate new modules and familiar dev boards. Learning as much as I can to create things I can use!