In this article, I'll show you how to trigger videos to play on a Raspberry Pi by tapping an RFID on the RFID reader!

I will be using an 860MHz UHF RFID reader module (UART-based) through Raspberry Pi. The applications demonstrated in this project can extend into a variety of domains, for example, a retail experience where customers can tap products on a reader to see a product video about it. It is also a great project for folks that are really new to programming.

This project will show you how to set up the RFID module with a Raspberry Pi with the help of a USB to serial converter cable. We will then write a Python script to interact with any serial-based device such as this RFID Module. You can also integrate this project by adding a 16x2 LCD by following the tutorial How to Connect a 16X2 LCD to a Raspberry pi.

I got the FM-503 860MHZ UHF RFID reader from China. The most attractive part about this module to me is that it can trigger from long distances â€” it all depends upon the antenna of this module. The FM-503 is basically an 860-960MHz UHF RFID reader on a development kit board. It can be connected via TTL/USB/UART with Android, Arduino, and Raspberry Pi.

A 3dbi ceramic type antenna is used in the current module. We can connect this module via different types of interfaces such as RS232, MINI USB or 5p/12p/15p/20p interface UART. If we talk about the transmitting and receiving data rate, this device can transmit data of 26k bps and receive at around 40K bps. Some more information can be found in the table below.

Setting Up Your Raspberry Pi

First of all, boot up your Pi in Raspbian. If you donâ€™t know how to setup Raspbian, check out the tutorial How to Setup Raspbian in Raspberry Pi.

After installation, insert the microSD card into your Raspberry Pi and connect the keyboard, mouse, and HDMI display to your Pi. Once everything is connected, open the Raspbian terminal and perform the following commands:

Copy and paste the test.py Python script to your Raspberry Pi home folder. 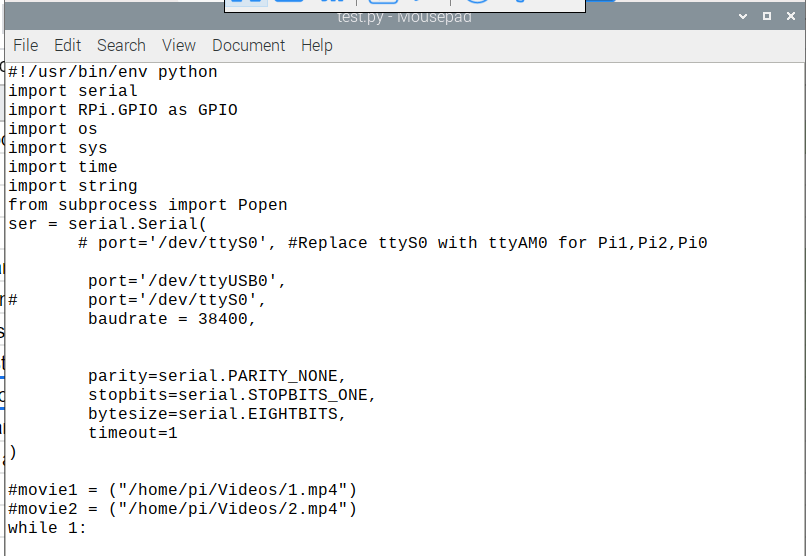 With the script loaded, go to your terminal again and navigate to the folder containing the test.py script and type the following command:

The script will start reading all of your RFID cards. Now, letâ€™s read all the cards through the terminal and save them in a notepad file in order to reuse again in the next Python script. 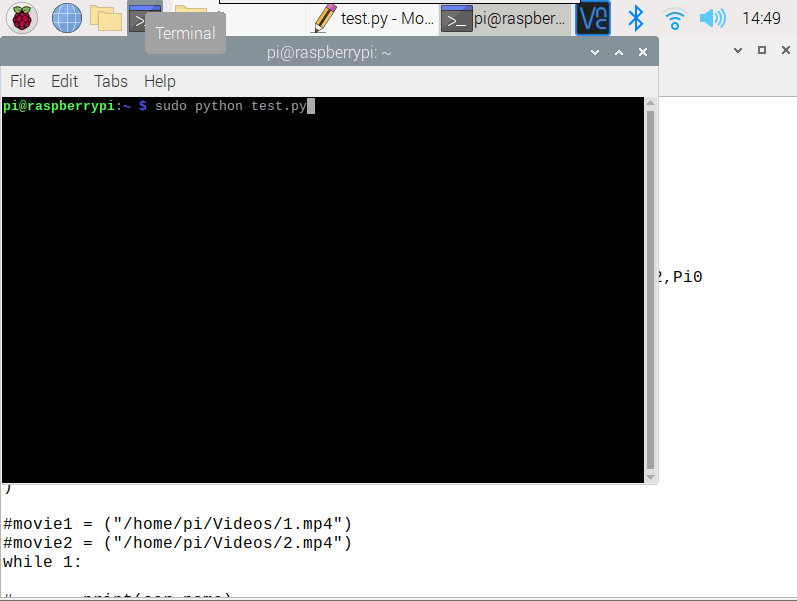 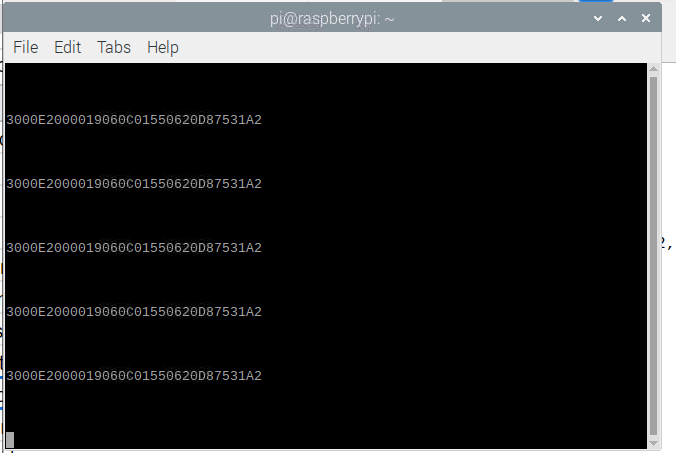 After the above steps, copy and paste the Python RFID_PLAY_VIDEO script into the home folder of your Raspberry Pi.

Open the Python script in the built-in editor of Raspberry Pi called Mousepad and replace the RFID ID tags with your own ID tags which were already saved in the notepad. 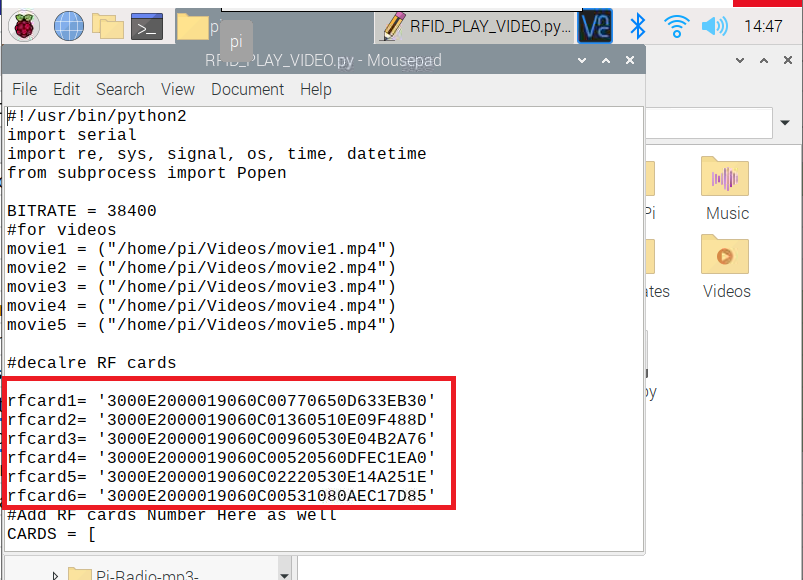 In the above script, each RF TAG ID will call each video from this directory: /home/pi/Videos/moviex.mp4.

For example, rfcard1 will call movie1 and so on. We are making this project with six cards for five movies, the sixth one will be used for ending.

The next step is to copy and paste the videos you want to use into your Raspberry Piâ€™s directory: 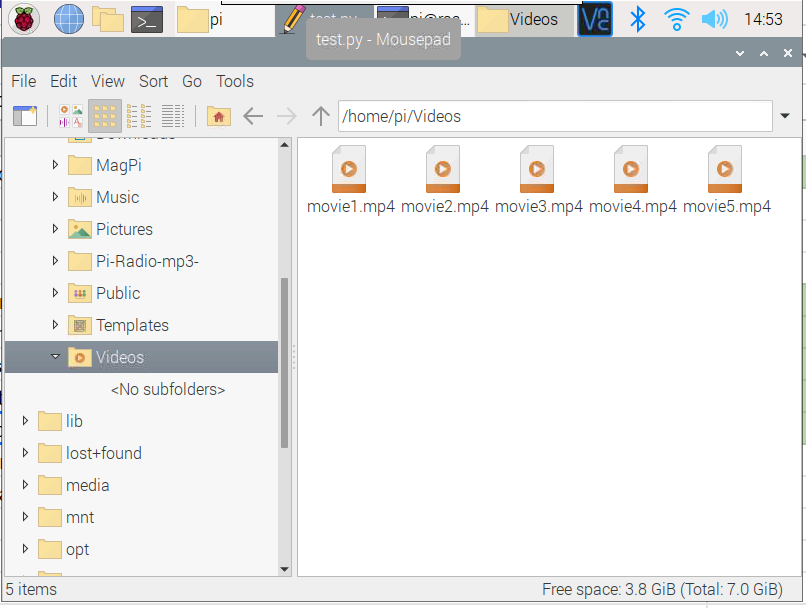 Next, open your terminal and run the following command: 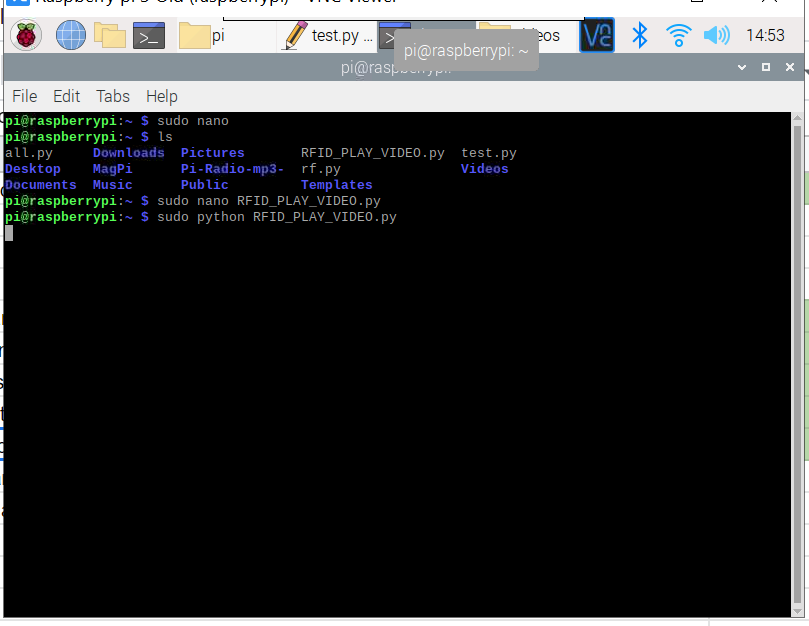 Tap your RFID card near the RFID antenna. It will start playing your video.

When you take the first card, you will see something like the screenshot below. Soon after, the Raspberry Pi will start playing that video. 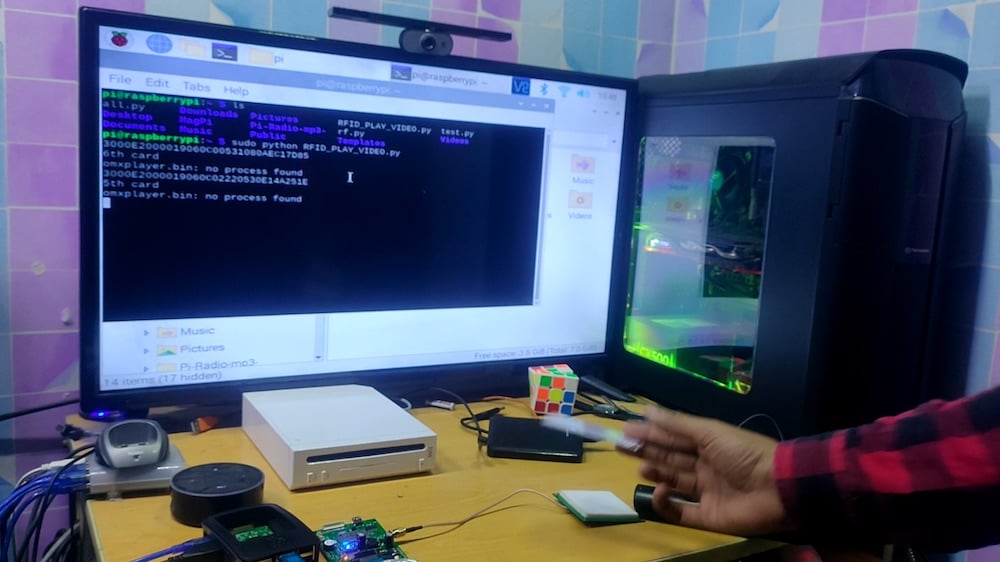 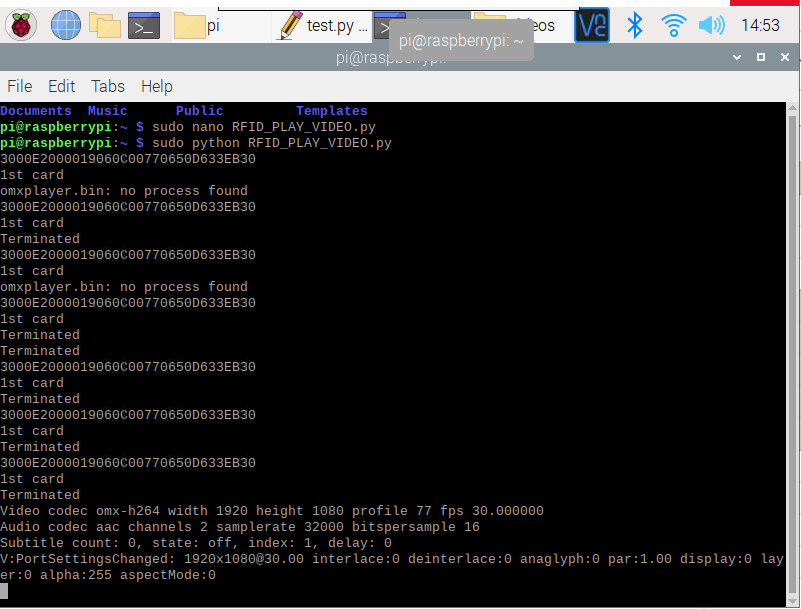 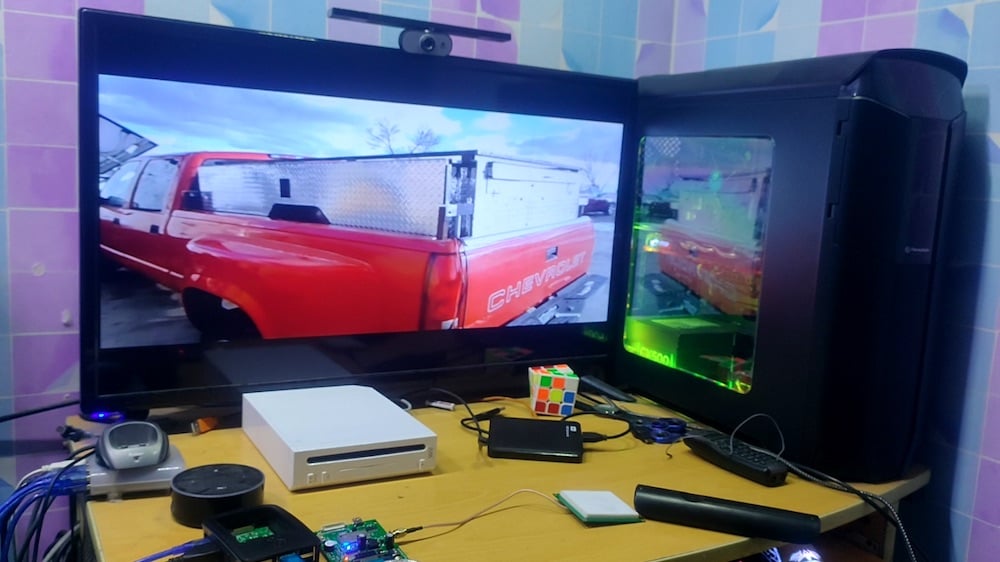 When you take your sixth card (which is actually used for terminating the video) you will see Terminated at the top of the screen: 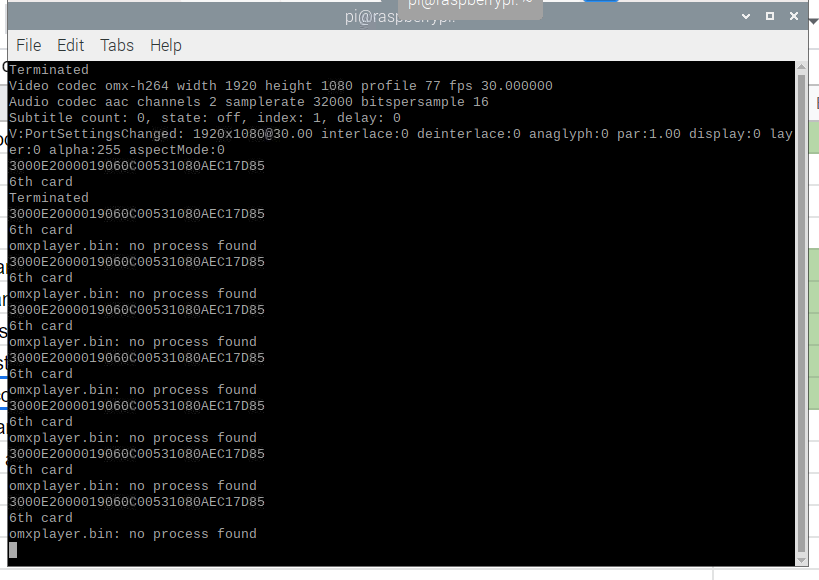 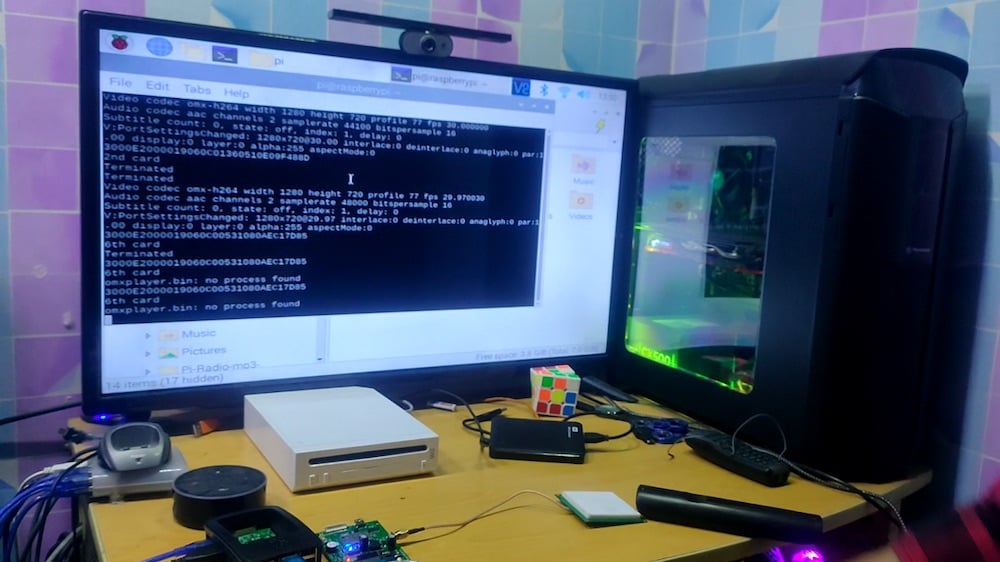