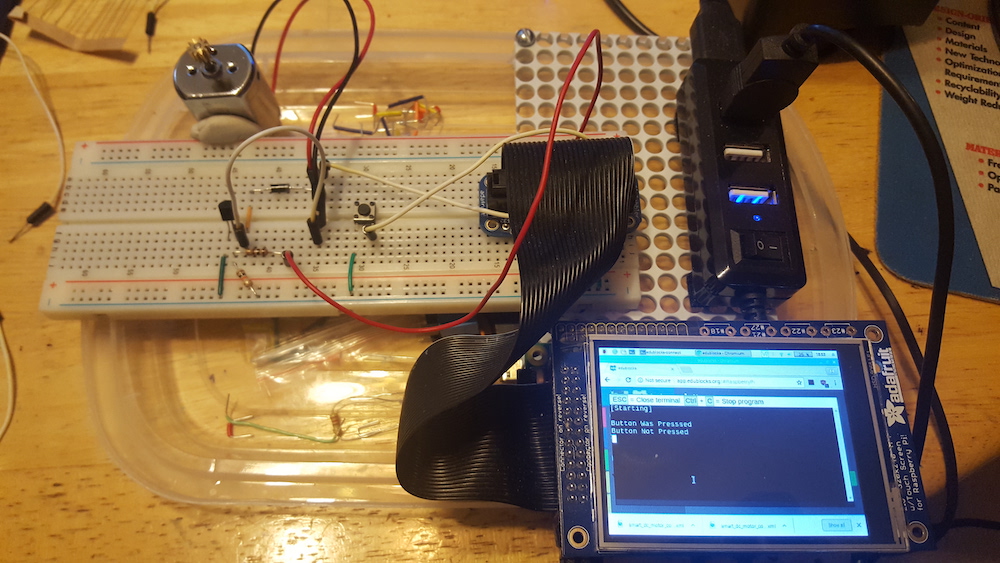 Learn how to control a DC motor connected to a Raspberry Pi Zero WH with EduBlocks, a Blockly-based language.

In this tutorial, you will learn how to wire a small DC electric motor to a Raspberry Pi Zero WH and how to control the motor using EduBlocks. Youâ€™ll also learn how to build a mini programmable automation controller (PAC).

To operate a DC motor, an electric switch and DC battery can be used to control the electromechanical component. Although this simple control circuit can operate a DC motor, there is a limitation â€” there is no ability to operate the DC motor for speed and precision motion control applications. Therefore, a transistor is used to control the DC motor. Figure 1 shows a typical transistor DC motor driver circuit. 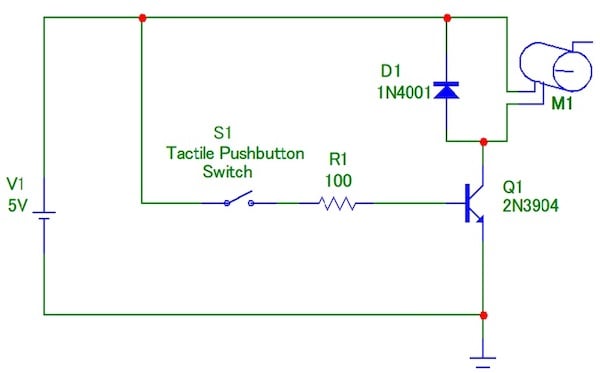 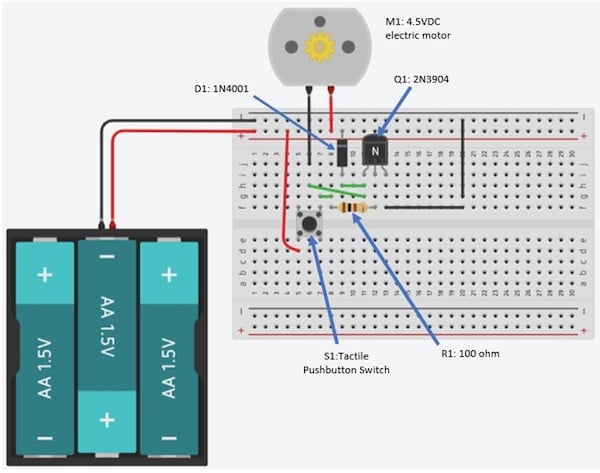 Pressing the tactile pushbutton switch turns on the 2N3904 transistor. The transistor allows electrical current to flow from its collector pin through the 4.5 DC electric motorâ€™s winding and emitter pin to ground. The motorâ€™s shaft will rotate. Releasing the tactile switch stops the motor from rotating.

Although you can use a tactile pushbutton switch to operate the transistor DC motor driver circuit, the electronic device can be improved using an automatic software control technique.

Operating the Circuit With a Raspberry Pi Zero WH

If you have not installed EduBlocks onto the Pi Zero WH, follow the installation instructions from the getting started tutorial.

Once EduBlocks is installed, wire your transistor DC motor driver circuit to the Raspberry Pi using the wiring diagram shown in Figure 3. 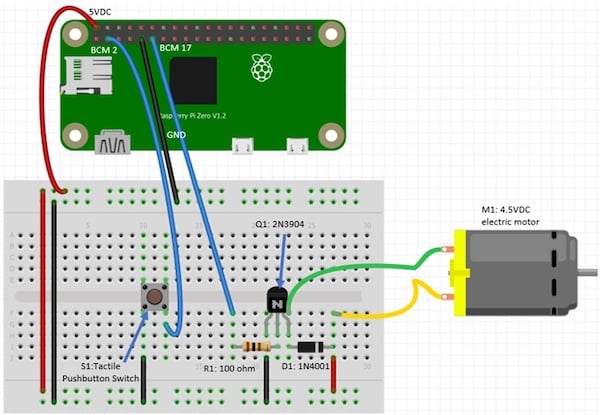 The orientation of the 2N3904 NPN transistor and the 1N4001 diode is important. You will need to follow the placement of the components onto the solderless breadboard as close as possible. Not following the electrical wiring diagram may cause the transistor driver circuit to not operate properly. As an additional reference, the electronic circuit schematic diagram is provided in Figure 4. 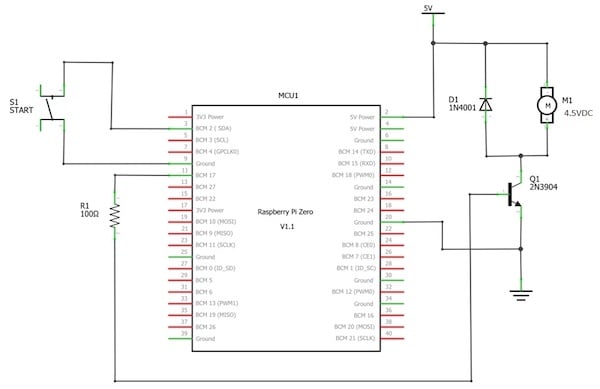 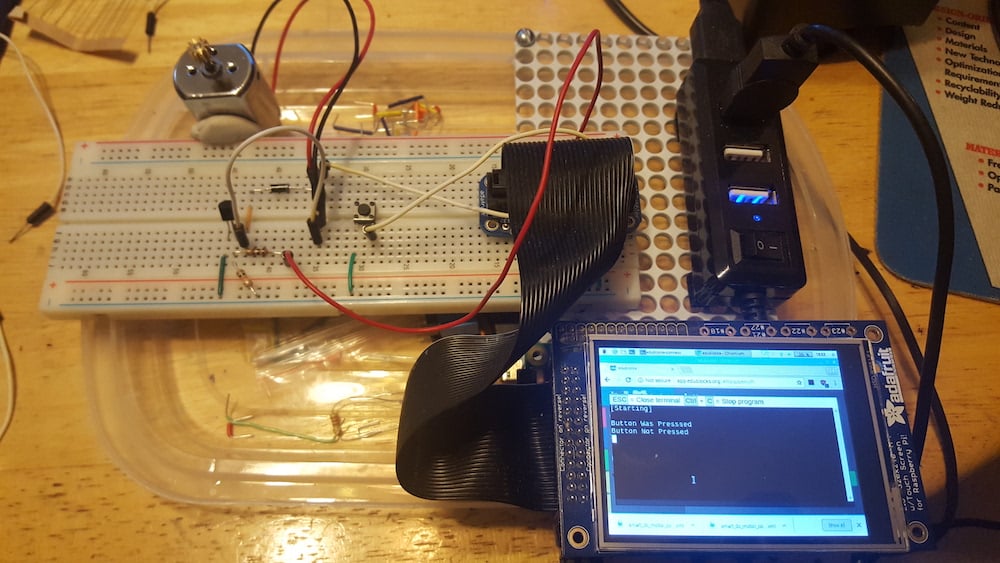 I added a thin film transistor (TFT) LCD touch screen to act as a human-machine interface (HMI) to program various operating modes for the electric DC motor. These operating mode functions are also programmed using the EduBlocks software. To add something similar, check out How to Set up Touchscreen Rotation for Raspberry Pi Projects.

Note that the TFT LCD touch screen is optional. With the DC motor wired to the Raspberry Pi, you are now ready to code the EduBlocks control software.

Also, two tactile pushbutton event messages of Button was Pressed and Button not Pressed will be displayed on the touch screen or HDMI monitor. 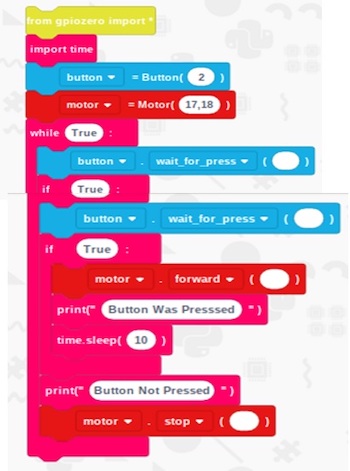 Figure 6. The EduBlocks code to operate the electric DC motor wired to the Pi Zero WH.

The equivalent Python-based GPIO Zero code is provided in Figure 7 as reference. 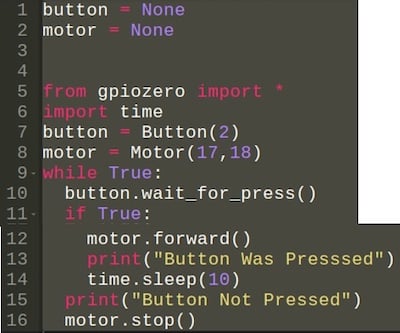 As a design challenge, try replacing the tactile pushbutton switch with a light sensor for hand gesture operation and control of the electric DC motor. Happy controlling!