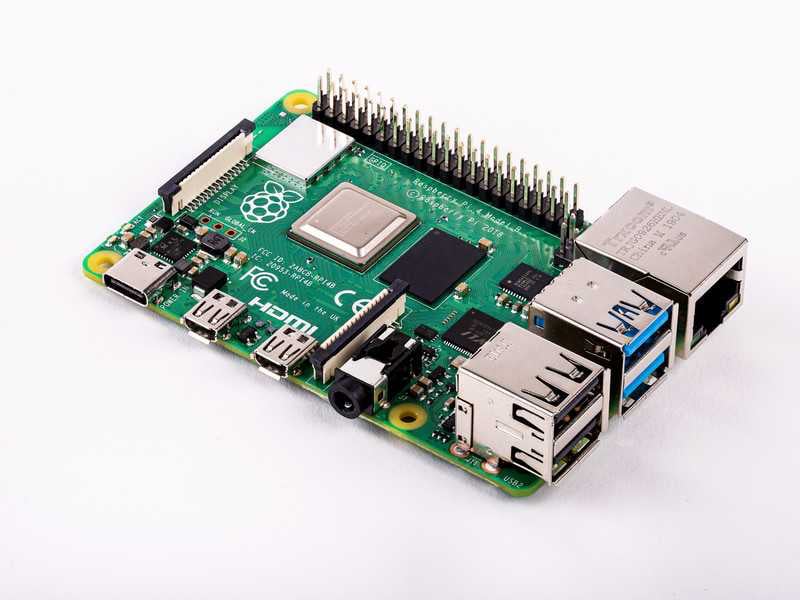 Raspberry Pi just announced the rollout of the Raspberry Pi 4! Let's take a look at the biggest upgrades.

The new Raspberry Pi 4 was just released and it adds many new features that make it a pretty radical improvement from the Raspberry Pi 3. First off, letâ€™s compare the technical specifications. Hereâ€™s a table of the comparing the RPi 3 and RPi 4.

Letâ€™s breakdown a few of the Pi 4â€™s most notable improvements.

At the same $35 price point, the Raspberry Pi 4 Model B comes with a faster processor that handles faster RAM. The 1.5GHz processor speed allows the single-board computer to compete with low-end laptops, while the LPDDR4 SDRAM provides quicker memory access than the Pi 3 B+â€™s LPDDR2 SDRAM. Not only that, but a 4GB RAM version is available for users willing to spend $20 more for the computer.

It ditches the microUSB power port in exchange for a USB type C port. Actual gigabit Ethernet is included without having to allocate and lose out on a USB port. Instead of the Pi 3â€™s full-size HDMI port, the Pi 4 features two micro-HDMI ports that can handle two 4K displays simultaneously. The Pi 4 also supports OpenGL 3.0 Graphics, unlike the Pi 3.

Similarities Between RPi3 and RPi 4

The Raspberry Pi 3B+ and the Raspberry Pi 4B share the same form factor and GPIO compatibility with Pi Hats. However, some Pi 3 cases may not fit the Pi 4 because of the decision to swap the Ethernet portâ€™s location with that of two USB ports.

Should You Upgrade to the Raspberry Pi 4?

At the same price point, the new Pi computer looks like a solid deal for any hobbyist. However, there are some reasons to stick with RPi 3.

Your project needs the exact layout of the Pi 3.

Since the Ethernet port is in a different location and the full-size HDMI port has been removed, projects with limited space for adapters and more cables would not benefit from an upgrade. Since this will not be an issue with most projects, letâ€™s move on to the next reason.

Your project MUST run on less than 3A.

If your project demands low power consumption, the Pi 4 may not be for you. Though it is an efficient computer, it has a minimum current draw of 3 amperes while the Pi 3B+ has a minimum of 2.5 amperes. This may be important for remote projects with small batteries, projects without a stable power supply, or power generating projects.

Your project simply doesnâ€™t need any of the Pi 4â€™s upgrades.

Before making an impulsive purchase, make sure your project can be improved by having more RAM, a faster processor, and better connectivity. While machine learning projects would greatly benefit from the aforementioned features, a weather station that emails you the temperature and humidity outside might not. Unless your project is still in the ideation stage and you have not purchased the Pi 3B+ yet, there is no need to upgrade your current setup.

If none of these applies to your projects, then the Raspberry Pi 4B is definitely the right choice for you. With the increased processor speed, larger memory capacity, and plenty of peripheral upgrades, the Pi 4 enhances the Raspberry Pi lineup with a modern and dependable single-board computer.

What Do You Think?

Tell us what you think! Did you already order the Raspberry Pi 4? What upgrade are you most excited about? Let us know in the comments.