Communicating with an ATmega168 8-Bit AVR Microcontroller with UART

Communicating with an ATmega168 8-Bit AVR Microcontroller with UART

Learn about using UART with an ATmega168 and how it can be used to communicate with a PC!

So far we've learned about using the different peripherals found on the ATmega168. Now we will look at using UART and how it can be used to communicate with a PC!

Catch up on the rest of the ATmega168 series here:

Microcontrollers often find themselves in specialized circuits with specific functions such as measurement, monitoring, and controlling. However, there are instances where connecting a microcontroller to a computer can be incredibly beneficial or even necessary (for example, device configuration). There are several ways this PC-Microcontroller communication can be achieved, including...

While these forms of communication may allow for high data-transfer rates, they are rather difficult to use, as well as being overkill.

Thankfully, there is one other type of communication that most microcontrollers come with called UART, which stands for Universal Asynchronous Receiver/Transmitter.

This is a simple serial connection that can be used for sending small amounts of data at low speeds and is incredibly simple to use and implement. What makes UART even handier is that there are USB-to-serial converters that can be used to allow a microcontroller to communicate with a PC via USB using a virtual COM port.

Serial communication using microcontrollers and computers can include many different settings, including handshakes, parity, and stop bits. However, in this tutorial, we will look at the simplest form of serial communication, which is also one of the most common. So the first thing we need to look at is how serial data is sent. First, letâ€™s look at the hardware!

A serial peripheral on a microcontroller in its simplest form is a glorified shift register that uses two separate I/O pins for sending data (TxDn) and receiving data (RxDn). 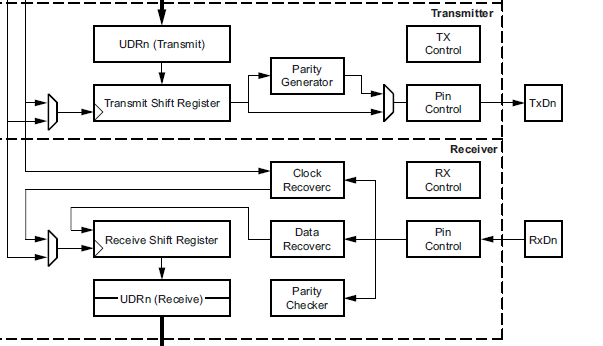 The protocol itself that is used in UART modules (sometimes referred to as RS-232) contains options and extras that can help with data transmission/reception. The diagram below shows a typical UART transmission, which includes a start bit, the data itself, a parity bit, and stop bits.

Images taken from the ATmega168 datasheet

IDLE â€“ If there are no transmissions occurring, the transmit line must be left at a logical 1 (5V, 3.3V etc)

Stop bit â€“ This is required to stop the transmission and is a logical 1. Sometimes, two stop bits can be used, but normally only one is used

UART on the ATmega

The UART module on the ATmega168 is very complex, as it allows for different modes of operation (including synchronous transmission), but we will be configuring the UART to use the most common setting that is suitable for 99% of UART-based projects.

The first thing we need to configure is the clock source for the UART module (this also configures the mode in which the UART operates). Since we will be using asynchronous transmission (clock is not transmitted, only data), we will use â€œnormal asynchronousâ€. To do this, we set both UMSEL bits to 0 in the UCSRnC register.

Since most transmissions donâ€™t require parity, we will disable this bit. To do this, we need to set both UPM bits to 0, which can be found in the UCSR register.

For the stop bit, we will only use one stop bit, which is done by clearing the USBS bit found in the UCSRnB register.

The UART module is capable of sending data at different bit widths, but for most projects we will use 8-bit data sizes, since our microcontroller is an 8-bit device. To do this, we set the value of the UCSZ bits to 011 found in registers UCSRnB and UCSRnC.

For our serial setup, we will use a baud rate of 9600 (a very common baud rate). The baud rate can be calculated using the formula found below, however, it is easier to use the tables found on page 163â€“165.

Since our ATmega168 is connected to an 8MHz oscillator, we can look at the table below to see what value we need to set our UBRR registers to.

For 9600 baud we will therefore use a value of 51. Note that your CLKDIV8 bit may be set, and if this is the case, then your baud rate may be eight times slower than you expect. If this is the case, try using a UBRR value of 12 instead and set the U2X0 bit on, or use a higher clock speed.

There are several enable bits we need to set and others that are optional. The first two bits that we need to enable are RXEN and TXEN, which enable the receiver and transmitter.

There are also two interrupt enable bits we can set, which means when our UART module finishes sending or receiving data, an interrupt will fire (useful for real-time applications).

One register, UCSR0A, can be helpful for determining the state of the UART module because it has several status bits.

This example will look at creating an echo device, which will wait until a connected PC sends a byte down the UART line. Once detected, the AVR will then immediately send the same byte back to echo the message.